The chase is on across Liverpool in Race Against Time – a dramatic immersive theatre experience. It featured film, animation, projection mapping, immersive theatre and a lot of running! The show took place across multiple venues so my role was to not only write music that enhanced the story but more importantly immersed the audience as one of the show’s main characters. All the speakers had to be carefully concealed and playback without a hitch for each audience group.

I also put together a live band for the show who performed throughout and played some tunes at the afterparty. As well as playing guitar in the band I wrote, arranged, and worked with the ensemble on the songs.

We even made a whole film that was played to kick off the show, featuring music that I wrote: 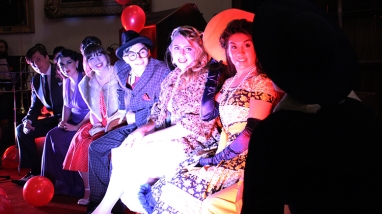