Now for the third show I worked on whilst at Hope Street, we brought new meaning to the idea of ‘immersive theatre’. Somewhere between a play, a video game, and a film; the show mainly consisted of four hours of orchestrated mayhem that had audience members being chased through various famous Liverpool locations whilst solving clues and being fed pieces of narrative and performance along the way…

It was without a doubt the most ambitious and challenging projects I have been a part of, we had three weeks to devise and produce the show. There were lots of different media forms that needed music in the show, so I wasted no time getting stuck in as musical director, starting with:

Very early on in the process Adam McGuigan (the director) was keen to have some sort of live music in the show. Knowing this would be one of the more problematic and challenging aspects of the show, my first task was forming a band.

As the show was set in the 1950s, it seemed fitting to have a little jazz band. With a meager budget I decided to aim for horns, drums, guitar, and vocals. Luckily a few of the actors were fantastic singers so I enlisted the vocal talents of Elouise Bracewell, Dora Colquhoun (who also wrote her own fantastic song for the show), and Frankie Panchoo. The fact they were also in the cast meant I could write songs that suited their characters and were linked to the show’s narrative. Initially I wanted a double bass as well (because what 1950s jazz band doesn’t have a bass?) but with a meager budget and not that much time, as I still had to work on other aspects of the show, I didn’t have much luck and it was back to the drawing board for a little rethink.

Instead of admitting defeat, I specifically composed and arranged music that transferred the bass guitar duties to electric guitar. Even though it wasn’t ideal, I think it made a great substitute given the circumstances and for a five piece band we had a surprisingly large sound! As well as vocals, I had the fantastic Edoardo Vittori on drums, multi-talented Edward Feery on trombone, Mycroft Milverton on sax, and little old me playing electric guitar. We played a few opening songs at the start of the show (as the audience had a lot of dull forms to fill in given the amount of participation there was in the show) and we also serenaded the exhausted audience and performers at the show’s speakeasy afterparty. Unfortunately, there isn’t a recording of the band in action but I made a mockup recording (with added bass and piano) of one of the show’s songs which you can listen to in the player above. 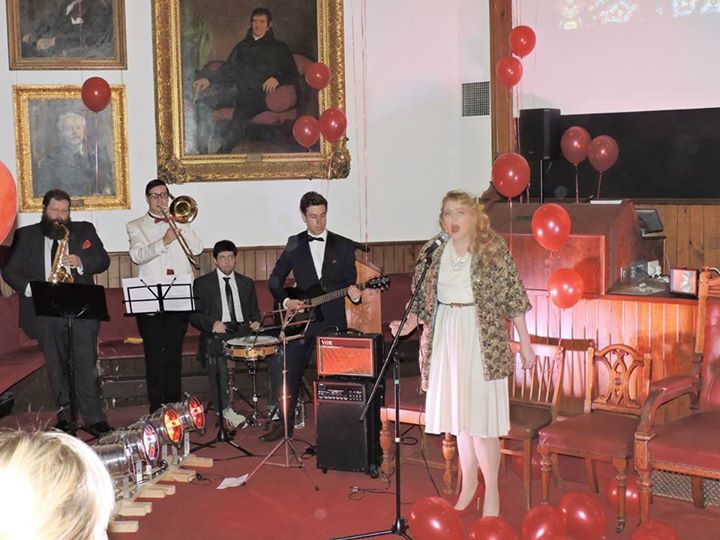 Before the audience got out of their seats, the show started with a film premiere like no other. They began watching a film (we had made from scratch) but then before they knew it, the film seeps into reality and the film director is shot at the premiere in front of the audience (it made me jump and I knew what was coming!). I wrote all the music for the film which was a big undertaking in itself, it was great to try and emulate some of my film composer heroes, particularly Bernard Herrmann. You can view the whole film online on Vimeo, although luckily you don’t have to get out of your seat and solve an entire murder mystery at the end of the film this time!

As well as the film and live band, there were additional pieces of music I wrote and selected for the show to accompany the action. I wanted the film score to seemingly follow the audience around the different locations as they essentially became more and more embroiled in their own film noir adventure.

As the audience ran out of the film premiere at the start, they encounter the menacing antagonists for the show “the greys”. They were standing on the steps of Liverpool’s Metropolitan Cathedral threatening the audience and confusing wandering tourists and bystanders. We had concealed a speaker behind the audience so I wrote some accompanying film music that continued where the film left off, blending the end of the film into reality… kind of. I was really pleased with how effective it was, the audience by this point were well and truly immersed!

And another moment from the show (as there’s so many to list) was from the finale. Here all the audience members congregated again, and witnessed the final interactions between the actors before everything goes a bit crazy with a spectacular projection sequence developed by the show’s visual masterminds Draw & Code. You can listen to the music I wrote for this final choreographed sequence in the music player above (fittingly titled finale). It was a great chance to blend together all the character melodies from the show and pay another homage to Hollywood film music. 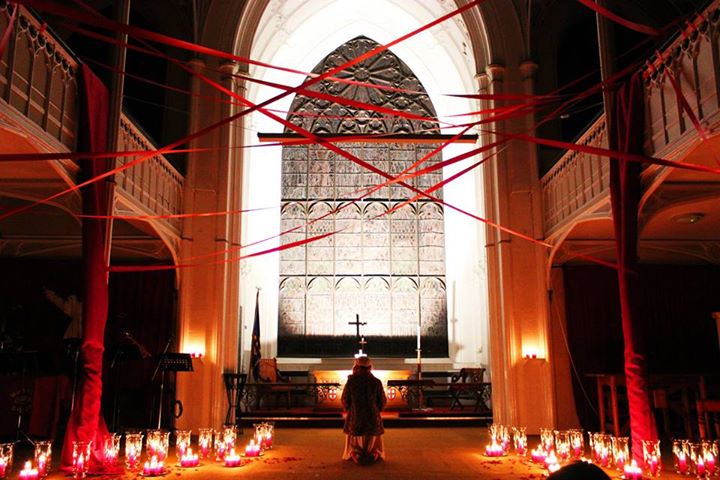 I still can’t quite believe we managed to pull it off, the sheer ambition of the show wouldn’t have been feasible without the talent of director Adam McGuigan. It was a tiring and exhilarating ride (both for us and the audience) but a great example of what can be done with a talented, focused team, and a bit of movie magic.

Check out this great show video Draw & Code produced which has footage of the whole show, and hopefully gives you a better idea of what on earth I’m talking about!