The second show I worked on at Hope Street, Spring Heeled Jack, was entirely different to the previous in almost every aspect. Led by former Hope Street’ers Andy Gledhill and Tessa Buddle (aka Suitcase Ensemble), the idea was to create an outdoor procession and show that brought together various community groups surrounding Everton Park.

As musical director I worked with Andy at Suitcase Ensemble to co-ordinate what ended up being a very music-led show. There were lots of little bits of music so we needed to make sure it all somehow linked together and told the story of Spring Heeled Jack in an interesting way. Seeing as there were so many bits of music, probably best I break things up a little…

Stopping the audience in their tracks to sing a song and sell my wares.

To start the show off, we had various pieces of street theatre / walkabout performances that the audience could watch. I decided to get stuck in and do a bit of performing myself which involved a slightly dodgy character trying to sell his ‘multi-lyrical dreamcoat’ for the troubador that keeps forgetting their lyrics.

Unfortunately, no one took me up on the offer.

After trying to sell my coat and singing a few songs, I worked with actors Natasha Patel and Elouise Bracewell where we performed on a mobile music hall stage. I strummed along to four songs that we wrote together, explaining the love / hate relationship between the two singers and Spring Heeled Jack. Here’s a photo of us in action with the beautiful Liverpool skyline as a fitting backdrop:

After the crowd had been thoroughly entertained by the walkabout lot, we gathered a little further up the park to begin a procession – there was dancing, puppets, a giant speaker / trike thing, and of course music! We had a small band heading the procession with some jaunty tunes (one of which we recorded and you can listen to in the music player above). As well as playing guitar in the procession, I wrote bits of recorded music that were featured in other sections of the procession through speakers. It was loads of fun, check out some of the pictures below: 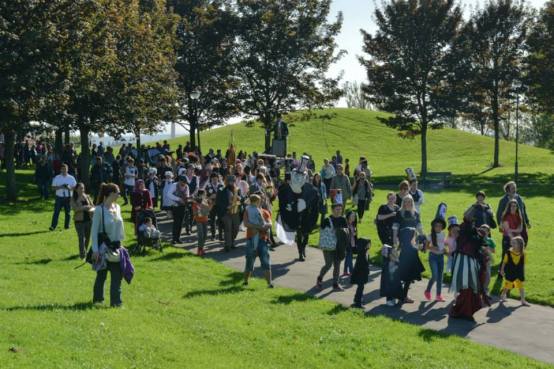 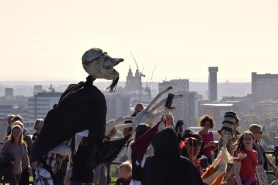 The procession led the audience (and us) to a small carnival site we had prepared with some tents featuring static performance and some of the wacky street theatre performers returned for an encore as well. We then took to the stage and played some music to welcome the return of the man himself, Jack, as a massive green smoke spewing puppet!

This was a really fun project to work on, not just because of the music but the fact I was fortunate enough to work with lots of young (and old) community groups from Everton. Normally quite a close knit area with an incredibly rich and at times troubled history, it was fulfilling to see the young performers take part and enjoy the show. A number of people also approached us towards the end and were overjoyed that something like this brought the community together and was a cause for celebration. Hopefully we can do something similar in a few years time, it was ambitious and hard work but the positive impact and reception made it one of the most fulfilling projects I’ve had the opportunity to work on!

Thanks to Hope Street Limited and Jonathan Wyn for the fantastic photos.

One thought on “Spring Heeled Jack”